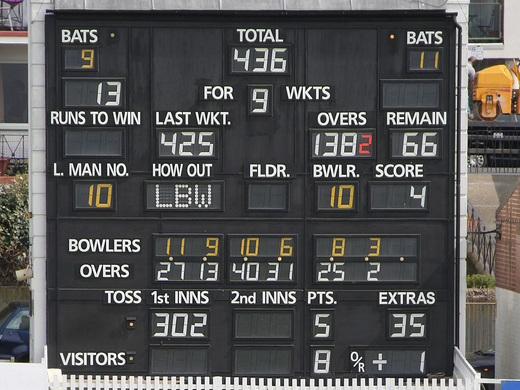 A long anticipated first game of the season for both teams saw a high scoring thriller at Hackney Marshes. With a lighting quick
outfield, St Clements had no hesitation in opting to bat first after winning the toss. Despite the earlier loss of one of their openers they quickly set about making Clapton pay for some wayward bowling and poor fielding. The charge was led by Afghan
Khan who rode his luck after being dropped three times to strike a hugely impressive 146, flaying the ball to all parts. He was
ably supported by the redoubtable Arslan Javed (71) to see St Clements reach 281/5 ,with only Clapton captain Jamie Doe, taking 3/33 towards the back end of the innings, turning in any bowling figures of note.
At the half way point it was clear that it would take one of the biggest chases in Clapton’s ten year history to win the game. St
Clements started well, with excellent lines and lengths from their opening bowlers to make stroke playing difficult. But Clapton’s openers Jamie Doe (47) and number three Tom Taylor (32) hung in there, running singles hard and taking any opportunity
to turn ones into twos. Slowly Clapton built partnerships and as the change bowlers came on, took advantage of anything wide
or short to take the initiative. At 122/5 at the 20 over mark though, there was still a mountain to climb. Enter the Clapton middle
order heroes of Ankit Chandna (26) and Adnandraj Venkatasamy 62 who took to score to 184/5 off 29 overs leaving 100 of the
last ten.
Despite needing 10 runs an over, the momentum was with Clapton and the nerves started to affect St Clements bowlers. The
loss of Ankit’s Chandna’s wicket brought Clapton’s MVP Ishmael Matvad to the crease who controlled the final leg of the epic
chase to perfection, scoring 47, supported by a final cameo from Iqbal Miah (17) to see Clapton over the line with two overs to
spare. A brilliant start to the season that both teams could be proud of.

On a glorious sunny day, Shaeed and Pakky opened the innings for Tower Hamlets CC and scored freely in the first few overs bowled by Vinith Vikram and James Everdell. James took the first wicket in the 6 th over of the innings when Shaeed got out after scoring 15. Vinith struck from the other end as he took two more wickets in the very next over. Tower Hamlets CC then kept the overs very tight as they gave away just 8 runs between over # 7 and 11. The bowling team was soon rewarded as Chetan Soni struck twice in over #13. For the batting side, Mithun played superbly as he held the innings together while wickets continued to fall from the other end. Mithun scored 22 before getting out to Akash who skilfully used his flighted deliveries to fox the batsman. In the end, Tower Hamlets CC were all out for 96 in 25.3 overs. For the bowling team, Chetan took 3 wickets, while Vinith and James shared two wickets each.

Chasing 97 to win, Canary Wharf Royal CC put up a solid batting performance and chased down the target with ease, helped with 36 extras given away by the bowling team. Abhishek Banerjee and Charan Lochan gave a strong opening partnership. Sricharan held the innings together and scored 37 with the help of 5 boundaries. Abhishek was the first to go after scoring 6 as he top-edged a ball by Rohin that he was trying to flick. Then Sricharan and Arjun Reddy kept the scoreboard ticking and took the team score into the 90s. Badol eventually got Sricharan out LBW with an incoming delivery. With just 4 required to win Arjun finished the match in style hitting the winning boundary through the mid-wicket

Finally, under the August summer sun, cricket has returned. Hackney Cricket Club got their season underway against Royal Sovereign at Millfields Park. In a year where anything now seems possible, Hackney’s skipper Edgar Maddicott won a rare toss and chose to bat.

With the smell on sunscreen and sanitiser in the air, the innings finally got underway. Openers David Stranger Jones and Oliver Wrighton were in a rush to make up for lost time, hitting 31 from the first four overs. However, the fast progress was halted as Sovereign bowlers Nick Franks and Tony ??? bowled a probing line on a lively wicket, picking up O. Wrighton for 18 and Stranger Jones for 12 in fifth and sixth over.

The innings slowed somewhat, as stalwarts John Turner and Maddicott soaked up the pressure and played carefully before both being undone by balls that misbehaved on the wicket. With Turner out for 18 and Maddicott 25, the innings was in need of some repair; the man for the task was Sam Wrighton. He played a gritty innings, dishing out cut shots to anything wide and wearing body blows from deliveries spitting up from a length. Little support was offered to him as the engine room failed to get going, this was until number 9, Paddy Clarkson strolled to the wicket. Clarkson hit lusty blow after blow to the boundary, hitting 59 from just 26 deliveries, making a mockery of the conditions and helping Hackney to 202 from 39.2 overs. The pick of the bowlers for Sovereign were Beaber Wickes, finishing with figures of 2-22 from his 8 and Lucious ??? with 3-32 from his 8 overs.

Sovereign came out swinging after the break, looking to make early inroads into the Hackney total. However, persistent line and length from the opening bowlers Robert Perrett and Simon Trevethick took the wind out of the sails by forcing early wickets. Tidy spells of 1-19 from 6 and 2-14 from 6 by Perrett and Trevethick respectively meant it was looking like an early finish, but clearly Beaber Wickes and Dwight Alexander had other ideas. The pair built a partnership, taking the total up to 131 together, with Wickes hitting a fine 57 not out. They were finally separated by a ball from spinner Laurence Perry that made the ‘ball of the century’ look regulation, as he bowled Alexander round his legs. Sovereign were put the sword from spells from Jotham Tonge and Man of the Match Clarkson who both took two wickets, before the game ended with a run out, leaving Hackney to pick up a winning bonus point with Sovereign all out for 151.

It had been a long wait, but finally cricket has returned, and long may it stay.