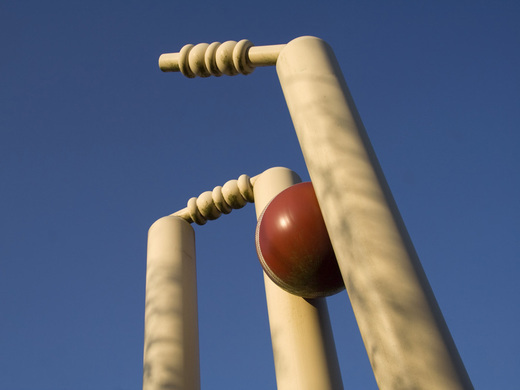 In a rearranged match necessitating both teams trekking over to Northwick Park in Harrow, Canary Wharf won the toss and put the Royal Sovereign in to bat. The Sovereign started badly, losing an early wicket but the unsteady galleon was steadied by a partnership of 55 for the 2nd wicket between Wayne Christian (24) and Erage Alexander (74). When Christian departed, beaten by the uneven bounce, Ken George came to the wicket and took on the bowlers, battering a quickfire 31 to keep the scoreboard ticking over. With the Sov on 130-3 after 21 overs, they looked poised to kick on and make a big score, however, a combination of poor shot selection, suicidal running and good bowling from Canary Wharf’s Nipak (23-2) meant that the Sovereign’s rubbish was put in the bin and they did not manage to bat the overs. However, on a pitch with very uneven bounce, Erage Alexander played brilliantly for 74 to anchor the innings and the Sov ended on 209 all out off 31.5 overs.

Canary Wharf started well, with openers Nipak (26) and Chanan (16) putting on 61 for the first wicket. The Sov couldn’t buy a wicket until Wayne Christian (35-2) and the evergreen Freddie Alexander (20-2) came on, Alexander trapping Chanan LBW and then a brilliant slip catch from debutant Ed Massey proving that one really does bring two. The Sov were fired up and tore through Canary Wharf’s batting with skipper Lucius Fulgence (21-3) bringing himself on after the drinks break to wrap up the tail.

A Welcome (and rare, this season) win for the Sov and an entaertaining game played with a good spirit between the two teams.

Unsettled conditions over Millfields saw the Camel reluctantly elect to bat first, hoping the soft green wicket would deteriorate as the day progressed. Brendon Cleaver and Lindsay Armstrong faced a stern test from seam duo Soloman Sule-Legbe and Kunle Philips, the ball swinging for the former, and nipping off the seam for the latter. After a long spell on the back foot, Armstrong lofted a 4 over the mid-on infield off Sule-Legbe, before Cleaver got onto the front foot to pull a telegraphed short ball from Philips over deep square leg for 6. These shots lifted the nerves - and the Camel balcony - but Philips replied in style for the final ball of the 7th over to remove Cleaver, a good ball resulting in a well taken catch at second slip. Dave Sendall and Armstrong consolidated to see off the final overs from the openers, and once the bowling change was made began to play with confidence, including a cultured cover drive from Sedall that dissected two Bloody Lads. Looking comfortable at 100/1 at drinks, with wickets in hand and an eerily quiet Bloody Lads soundsystem, the Camel could’ve been forgiven for thinking 220 plus was their minimum target. The Bloody Lads - often their own influential microcosm - had other ideas, playing their trump card in Gus Mackay and Tony Ruddenklau. Their awkward pace and length caused havoc with the brazen, unsuspecting Camel batsman. The duo were helped by some extraordinary catching - particularly at short cover by Walter Hudson Evans - and eventually the Camel fell for 169, Armstong making 44, Sendall contributing 39. This was well below their potential and a credit to the Bloody Lads spirit and vibe after drinks.

The Camel trusted the new ball to veteran seemer Kit Caless and Camel debutant Talor da Bank. Caless reliably tested the opening duo of Caius Pawson and Hudson Evans with pace and a tempting line. Da Bank began with 3 wides, and spent his first few overs finding his place on the wicket. His third over bought the wicket of Pawson, a stunning belivery that swung in from off to crash into middle and leg, with little Pawson could do but applaud. From there he collected a wicket per over with his swing and control, taking the whole Bloody Lads top order to finish with 5 for 23 off his 8 overs. Only a collection of errant wides prevented this being the best Camel figures in a league match - (Nick Chadwicks 5-17 in last years fixture). The Bloody lads fought through the middle period with Ruddenklau and Mackay batting solidly, albeit with a creeping run rate. Their solidarity had the many New Zealanders across the two teams nervous at the thought of a super over, and a throw from the boundary that caught the bat of a Bloody lad drew audible gasps from the still shell-shocked antipodeans. Finally, poor running and a brilliant throw from Sendall at deep mid off ended a valiant day for Mackay, run out for 10. Caless killed the contest soon after removing top performing Lad Ruddenklau for 41, the classy innings ended through a line and length delivery that caught the outside edge to keeper Cleaver - who took a sharp one handed catch. The day however belonged to da Bank, a debut to go down in the storied folklore of the Bloody Lads/Camel fixture.

Hackney CC remain unbeaten as they squeeze past Clapton & Oval in a low-scoring nail-biter with echoes of the Men’s World Cup final last weekend.

Hackney skipper Edgar Maddicott won a crucial  toss and put Clapton & Oval in to bat on a green Springfield Park track which was still recovering from two days of rain.  And the Hackney opening bowlers – Rob Perrett (0-13 off 6) and Craig Raddon (0-5 off 5) - took full advantage, giving nothing away while giving the batsmen plenty to think about with some swing and seam movement.   First change, Ben O’Regan, maintained the squeeze and was rewarded with a wicket in his second over, followed by some ‘friendly’ exchanges with Clapton no. 3 (Mitch Greenham) who did well to ride out some aggressive pace bowling.

Greenham (36) and Adarsh Chhabria (34) steadied the ship and tried to keep the scoreboard ticking over but it was a sticky wicket and bowling was tight so at the halfway mark, with only 63 on the board, it looked like Clapton would struggle to put on a defendable total.  Maddicott, also took possibly the catch of the season off his own bowling, snaffling one-handed a full-blooded straight drive that left the batsman standing in disbelief.   But Ishmael Matvad, Clapton’s erstwhile no. 7, arrived at the crease and with a free flow of the bat started to clobber some big sixes and regular boundaries, scoring 54 off not very many.  And special mention should be made to Iqbal Miah who came in to face the last ball of the innings and nonchalantly switch-hit over extra cover for four, taking Clapton up to a respectable 196 off their 40 overs.

Hackney knew it wouldn’t be easy going, and Matvad and Abdul Munim made full use of the sticky wicket – Matvad in particular bowling a great length and getting rid of both the Hackney openers cheaply and finishing with figures of 2-39 off 8.  It was up to Maddicott (35) and John Turner (34) to step up and play a couple of really watchful innings on a wicket that didn’t seem to improve despite the sunshine, dealing with some balls dying and others popping up off a length.  At the halfway mark, Hackney were 85 for 2 and looked set to kick on and win comfortably, but Miah had other ideas and had Turner caught on the boundary and Maddicott bowled with a pea roller in the same over.  When Ankit Chandna got Jothan Tonge cheaply a few overs later, Hackney found themselves 117 for 5 off 27 overs, still fancying themselves but under no illusions as to the task ahead.

Ben O’Regan took charge and scored an assured 30 until an inside edge ricocheted off his pad and through to the keeper, at which point his partner Sam Wrighton – who had been happy to play second fiddle up until that point – stepped up and kept Hackney in sight.  With a rate creeping up to 7 an over, Wrighton and his new partner Jimmy Baber never panicked and steered Hackney to a run-a-ball chase.  Finally, Wrighton eased the pressure in the penultimate over with a swept six to the longest boundary, allowing Baber to hit the winning runs with two balls of the match to spare.

After 24 hours of heavy rain it was a testament to the skill and perseverance of the Hackney Council rangers that London Fields and Canary Wharf were able to play a full game of cricket this Saturday.

Canary Wharf won the toss and sent London Fields in to bat on a green looking surface that many expected to misbehave from ball one. Fortunately this was not the case and London fields were able to post a substantial score of 238 thanks to a hard fought 60 from opener Alex Turner and some impressive hitting from Vijay and Troy.

Canary Wharf’s reply did not start well as they lost 4 wickets inside the opening 10 overs. From this point on they were always behind the game but a well-crafted 65 from Siddesh kept them in the hunt until late in the day.