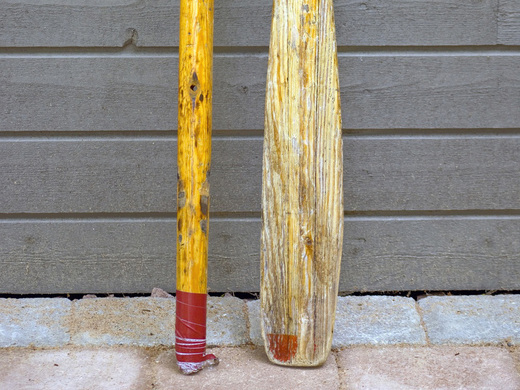 Hackney CC successfully defended their League title against a strong Canary Wharf Royals side in a blistering final, which produced possibly one of the finest individual performances in NELCL history.

Hackney CC’s skipper won the toss and elected to bat, confident in his batting line-up which had scored so many runs this season, despite knowing that the barnstorming Canary Wharf had consistently bowled teams out for low totals so far. This time proved no different it seemed, with some excellent controlled late-swing bowling from the Canary Wharf openers, Vinith Vikram knocking over the off-stump in the opening over, and Krishna Bala bagging a hat-trick of absolute stunners in his 4th.  And when first change bowlers Abinav Kumar got one and James Everdell got two in two in both their first overs, Hackney CC were left reeling on 45 for 7 off only 12.

This brought Laurence Perry and Simon Trevethick to the crease, who dug in and refused to give up. They played incredibly watchfully against an absolutely buzzing Canary Wharf, and prized their wickets above all else. And then, over by over the momentum began to shift, as Perry and Trevethick settled in and Trevethick in particular started playing some cracking cover drives and square cuts across the fast outfield.  By the time Trevethick was bowled for 28, the pair had steered Hackney to 95 for 8 and set the tone for Hackney’s numbers 10 (Archie Woodhead) and 11 (Craig Raddon) to follow suit.  Perry continued to guard his wicket with his life and then, sensing the moment, began to skillfully manipulate the field and start his own counter-attack, ending on 58* and Hackney all out for an astonishing 174 in the 38th over.

In reply, Canary Wharf’s gun bat, Arjun Reddy who’d plundered all bowlers this season, was keen to get going and, after a couple of streaky edges, hit a blistering 65 off 38 balls before being trapped lbw by the excellent Archie Woodhead. Woodhead also claimed the other opener, Charan Lochan, but the damage had been done as Canary Wharf had raced to 94 for 2 off 10 overs.  Things once again looked almost insurmountable for Hackney.

And then up stepped man-of-the-moment Laurence Perry.  With his array of left-arm leggies, googlies, flippers and quicker balls (and maybe a few other variations that not even the wicket-keeper could read), Perry was unplayable and unstoppable.  He bowled one round the legs, three through the gate (twice with a googly), trapped two lbw on the front and the back foot, and then took two stunning caught and bowled chances inches from the turf, including the final wicket diving one-handed to his left.  Words could never do justice to the fizz and intensity of that spell. Perry ended with figures of 8-23 and Canary Wharf were bowled out for 125 in 24 overs.  In a season full of team effort, it was a truly mesmerising individual performance that was worthy of clinching the title.

BLCC won by 2 wickets in fight for 3rd place

Both sides arrived at Springfield Park with the unusual prospect of playing in the first finals weekend ever to have been played in the NELCL. The Bloody

Lads and London Fields are very familiar friends and foes. There have been some titanic battles between the two over recent years with honors about even and the Lads having been on top in the past two seasons. The Bloody Lads were victors when the two met earlier this season.
The BLCC won the toss and Captain Walter Hudson-Evans chose to field. With the BLads feeling they had a strong bowling unit for the day they set about
their task. The Fields opening pair of Vijay and PA looked good in the early overs racing 32-0 off the first five overs. Kunle Adegbola-Phillips’ bowling was
its usual immaculate self swinging the ball both ways with ease on a beautiful length. He claimed 2-16 in an error free 8 overs. The BLCC bowling was on
the spot throughout. Stan Grant chipped in with 2-25 and their skipper chipped in with 2-35. The tight bowling made it hard for Fields to score as they lost wickets at regular intervals. The lower order helped the total along to 189 with contributions from Troy 38 and Laurie 28. The BLads felt confident going into the break knowing a sold batting performance should see them home.

The BLCC batsmen looked a little shaking with Jonty being dismissed for 0 in the first over. Phil was his reliable self with the ball making things tricky.
James Mulvey returning from a loan to village cricket looked to speed things up and got the BLads to 37-1 off their first 5 overs with some big sixes back up Spring Hill. With Kunle at the wicket things looked to be going smoothly with his effortless stoke play keeping things ticking over nicely. A strong
partnership with James MacAndrew was looking like putting the game out of reach before Kunle was dimissed for 71. As BLCC got within reach of the
winning post an amazing over from Muffi saw him take a hatrick! Fields must have thought they were back in with a real chance. Calming the nerves Stan Grant and MacAndrew were able to see it through with the BLCC winning the game by 2 wickets.
Both teams retired to the Anchor and Hope to reflect on a great day of cricket and a season rescued.

Sovereign snatch back bragging rights in thumping of Clapton & Oval

A glorious day at the NELCL outground of Valentine’s Park, as Royal Sovereign (224 all out) avenged their early season loss to Clapton & Oval (157 all out) with a comprehensive 67-run victory.

With the Sovereign masses turning up in droves and on time for the second week running – a new record, surely – the toss was actually contested, although with the late summer nights drawing in, the teams agreed on a revised 35-over exchange. Perhaps hoping that the vicious snakepit of a barely marked strip would make an imposing total impossible to amass, Clapton inserted the Sovereign to bat. Hopes of an easy chase faded quickly, however, as openers Challo (24) and Beenie Man (71) latched onto anything vaguely full of length and sped the good ship Sovereign to 68 without loss from the first 10 overs. There followed a breakthrough or two, including unfortunate ex-Claptonite Ray, run out without facing a ball; but the runs kept flowing, the ball kept flying and the platform at 20 overs stood at a solid 138-3. Attack leader Ish (7-0-3-29) had looked threatening throughout, though, and his reintroduction after drinks sparked a collapse to 160-7 and some crowing from the cock-a-hoop cockerels. The regular fall of cheap wickets in the middle order had the Sovereign dozing back into their groundhog daydream of wondering what could have been after such a strong start, although the run rate never dropped too far, with even the usually stingy Iqbal (5.1-0-2-33) unable to dry up an end for long. The louder the entreaties to ‘just bat the overs’ from the sideline, the less likely such a miracle usually becomes; but a spirited 10th wicket partnership of 39 left the Sov scoresheet resembling the pitch – bulging at both ends and foul in the middle. The bulk of the late runs were smacked by captain Ken Willock (53), who shepherded the score to 224 before holing out with 5 balls to spare.

The Sovereign were feeling boisterous after their traditional swig of rum between innings and an overdue transfusion of new blood into the bowling attack. Latest Sov talisman Devon ‘Beaver’ Weekes (6-0-3-25) and recent Antiguan recruit Ike (7-1-1-19) went Fire in Babylon on the Clapton top order, with the ball equally likely to fizz past the outside edge, cannon into the base of off stump, or careen over the batsmen’s heads. Thanks to the hot pace and borderline (ie actually) dangerous pitch, the thud of leather on flesh wasn’t much rarer than the sound of bat on ball, and the softened underbelly of the Clapton middle order was exposed to first change Joe Allen (7-0-3-19), whose low-slung accuracy ensured they could only limp as far as 56-4 at drinks. Amir (42) and Ish (21) took a few bites out of the less spicy dishes on the Sovereign menu, but when the quicks eventually did for them too, the unlikely chase took on shades of the impossible. Even with the required run rate up in the stratosphere, the ruthless Willock didn’t let up and unleashed the specialist death bowling duo of Ben Blausten and Oli French (1.4-0-2-11) to finish the job. Cheeky Iqbal (18) tried to save some face for the cockerels with some tail-end lolz, but after one switch-hit swipe too many he was trapped on the crease in the final over, thereby rounding off the innings, the game and another year in the NELCL.