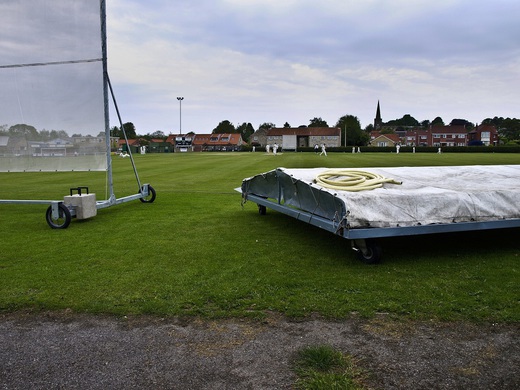 Against a backdrop of lightning and rolling thunder on the Marshes, Hackney CC set up an imposing total and a comprehensive win over Clapton & Oval CC.  With the forecast looking ominous, the teams began at midday with a reduced 35 over format.

Hackney CC skipper, Edgar Maddicott, won the toss and elected to bat. Openers Dave Stranger-Jones and Olly Wrighton got Hackney off to another flyer with Clapton‘s opening bowlers Ishmal Matrad (0 for 50 off 7) and Marcus Elwin (1 for 46 off 7) under pressure from the off.

Hackney reached 61 off the first 7 overs before Wrighton was bowled for 18 by a half-tracker that stopped in the pitch (aka “a slower ball bouncer”) by Elwin.  Stranger-Jones looked in a hurry and completed a chance-less and lightning-quick century off only 71 balls, taking advantage of some wayward bowling and a short boundary on the Marshes side.  However, the impressive left-armer Ankit Chandra (5 for 37 off 7) had other ideas with some big inswingers and a well-deserved five-for, snaffling two in two - including Stranger-Jones (109) - in the 23rd over with Hackney already on 166.

Then came a flash of brilliance in the field: Maddicott (21) smashed Lachie Macara (3 for 63 off 7) high and aiming for six to the huge canal-side boundary, but hadn’t accounted for Amir Khan’s 20 yard run and incredible dive to take a wonder catch inches from the turf. Lightning never strikes twice, or so the teams thought, but after some brief but clean hitting, Richard Keep (12) tested Khan out again with an identical shot, again 20 yards to the fielder’s left and again with identical results.  But it couldn’t stop the Hackney middle-order and tail setting up a imposing total of 261 for 9 off their 35, with some big hitting from Paddy Clarkson (16), a beautiful scoop shot over the keeper off middle-stump from Jotham Tonge (8) and quick running from Sam Wrighton (12) and Ben Wylie (13*) to keep the scoreboard ticking over.  Perhaps adding insult to injury, newcomer and number 11 Ross Collington smashed 14 off 5 balls, including a huge six off the last ball.

In response, Clapton & Oval couldn’t quite get off the mark, not helped by a heavy rain delay which made the wicket trickier to bat on.  Clarkson (1 for 23 off 6) kept it tight (and his footing, just about) and picked up the wicket of Abdul Munim (19) while Maddicott (1 for 33 off 7) opted for his off-spinners which Elwin (9) and Amir Khan struggled to get away.  Hackney’s fielding was as sharp as ever, producing the two key runouts of Khan (17) and Anand Venkatabamy (0).  The task then fell to Tom Taylor (45) and Mitch Greenham (26) who started to chip away, but the both fell to an inspired spell from Jo Tonge (2 for 28 off 7) serving up his box of tricks, pretty much bowling a different kind of ball every ball which meant the batsmen could never settle. At the other end, Laurence Perry (0 for 32 off 7) continued to produce his left-arm jaffers, with the ball spitting off the wicket and impossible to get away. And then it fell to the Wrighton brothers to wrap up the tail, with Sam (2 for 17 off 4) bowling his deceptively quick and swinging skidders and Olly (2 for 10 off 2.2) bamboozling with his beautifully flighted leggies - as Clapton & Oval were bowled out for 149.

I Don’t Like Cricket Club won a competitive cricket match for the first time in their history, as they overcame Tower Hamlets CC, and the weather, at Springfield Park on Saturday. Winning the toss and opting to bowl first IDLCC encountered stiff resistance from Tower Hamlets’ top order. Charlie (59), in particular, threatened to take the game away, at one point plundering 25 off Jordan Mcloughlin’s only over of the match. With 10 overs to go IDLCC finally fought back, taking wickets from both ends and drying up the runs, as Tower Hamlets finished on 213 off from their 35 overs. Chris Brightwell was the pick of the bowlers, returning figures of 30-3.

As the skies darkened, IDLCC began their chase with two targets in mind. Firstly, the overall target of 214 to win, and secondly, the rain adjusted target of 92 off 15 overs. Though conditions were in the bowler’s favour IDLCC were able to score freely, thanks largely to their Australian import, Liam Ridley, who scored an entertaining 55* from the 46 deliveries he faced. At the end of the 14th over, with IDLCC on 88-1, rain started to fall heavily, it was clear that the 15th over was likely to be the last of the game. This effectively meant that they needed 4 to win from 6 balls. Not wanting to settle for a narrow win, Liam Ridley left the result in doubt whatsoever, as he pummelled 20 from the over, making the score 108-1. As expected the team’s came off at the end of the 15th over, leaving IDLCC with a victory that looked a little more comfortable than it actually was.

After recent scorching weather the Bloody Lads and Bloomsbury Royals walked out on a damp Millfields Park looking to reignite a battle that has seen some feisty encounters in recent years. Both captains felt unsure how to proceed as the BLCC won the toss and decided to bat hoping to get the better of the conditions. With the pitch proving difficult to bat on the tight bowling display form the Royals saw it difficult for the BLCC to get things going. It didn’t take long for the first breakthrough; Raihan removed two BLCC batsmen in the 4 th over. Max Bennett set about steadying the ship with some solid defense and quick running between the wickets but today was always going to be about the bowlers. The Royals attack bowled accurately with sharp variations of pace leaving the BLCC batters struggling in the gloom. The BLCC plodded on valiantly picking up runs where they could. As has been the case on so many occasions it was left to the bowlers of the BLCC to get their team to a respectable total. Some nudgy ones and twos from James McAndrew and big hitting from Sheldon Greenland saw the BLCC finish up all out for 137. Surely the Royals would have been feeling confident as they tucked into their freshly delivered tea.

Stand-in captain Sheldon Greenland and Stan Grant opened the attack for the BLCC knowing the only way the could possibly win this game was to take early wickets. They didn’t have to wait long. With the very first ball of the Royals innings Stan Grant claimed his first victim with Rana chasing what could generously be called a ‘loosener’ and popping it up to point for the first wicket. What followed was truly a masterclass in pace and guile. The two SG’s ripped through the Royals batting line-up claiming 9 wickets between them. Sheldon Greenland finished with the amazing figures of 5-12, four of those wickets being bowled. The Royals batsmen couldn’t withstand the pace and accuracy of Greenland’s spell. Stan Grant picked up 4-25 thanks to some poor shot selection from the Royals top order as well as helpful movement of the pitch. Solomon Sule-Legbe came on to take the last wicket and seal a miraculous victory for the BLCC.
Huge credit is due to both teams for getting a game going on what was a less than ideal day. Past encounters have sometimes been a little bumpy but both teams showed the kind of love for the game and respect for each other which makes us all proud to be part of the greatest cricket league in London.