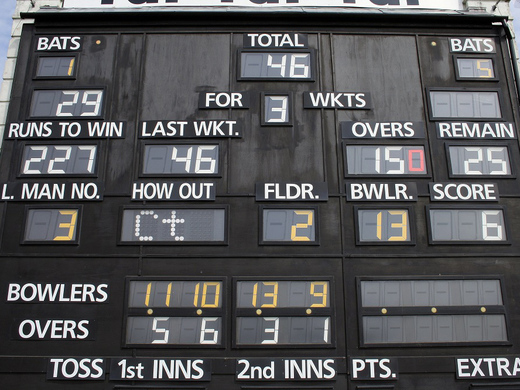 Royal Sovereign 151 all out beat St Clements 110 all out

St Clements won the toss and decided to bowl on a roasting day at Springfield Park. A calamitous run-out which removed Soverieng
opener Luke and a tight opening spell by opening bowlers Adnan (2-21) and Sikander (2-20) brought some early Sovereign wickets
which left them at 57-4 after 10 overs. Good runs in the middle order by Dwight Alexander (29), Devon Weekes (23) and Beanie (20)
steadied the ship and took the Sov’s total past the 100 mark with 19 overs played. A mini collapse saw the Sov lose 4 wickets for 12
runs, but a 10 th wicket partnership of 15 from Tony (6no) and Matt (8) took the Sov’s score past the 150 to 152 all out.
Despite being set a seemingly low total, Springfield Park can be a notoriously low-scoring pitch and St Clements chase started in the worst possible way, with Devon Weekes (5-36) building on his batting performance with a wicket maiden in his first over. Only Afghan (20) offered much resistance to a blistering spell for Weekes as he picked up his first fifer for the Sovereign. Lucius Fulgence (4-37) did a great job at the other end taking wickets at regular intervals with the help of his field, the catch of the day by Ken Willock, seemingly taking the ball in the hands with his eyes closed whilst running in from the deep. The other wicket fell to a Beanie Man run out.
Despite a reasonable run-rate from the home team, the fall of wickets was too regular an occurrence as the Royal Soveriegn picked up their first win of the season.

Very hot day although the pitch was green and offering plenty of support to the bowlers.
Camel lost wicket first ball and then proceeded to lose regular wickets.
LFCC had to work hard for their runs as well, but with such a small total they managed to secure the win with almost half the overs remaining.
Game played in good spirit and all secretly happy for the early finish, I’m sure.

L. Ridley and J. Hillier opened the innings for I Don’t Like CC. They put together an opening
partnership of 24 runs. L. Ridley scored 22 with the help of 4 boundaries before he was caught off the
bowling of Vinith Vikram. Vinith Vikram bowled a superb first spell giving away just 11 runs in his first
5 overs and took the important wicket of L. Ridley. First change bowler, Abhinav Kumar, took a wicket
in his very first over reducing I Don’t Like CC to 31/2. The 2 nd change bowler, Krishna
Balasubramanian, wrecked the middle order as he took 4 wickets in his quota of 8 overs giving away just
23 runs. This ensured that I Don’t Like CC couldn’t muster up any sort of partnership as wickets fell at
regular intervals. K. Pearson came in late and batted sensibly with the tail as he added 23 to the team’s
score. He was the highest scorer for I Don’t Like CC and remained not out. Vinith Vikram took another
couple of wickets in his second spell taking his total wickets tally to 3 in the match. In the end, I Don’t
Like CC were bowled out for 127.
Chasing 128 to win, Canary Wharf Royal CC put up a solid batting performance and chased down the
target with ease in 14 overs. Sricharan Lochan and Arjun Reddy opened the batting for Canary Wharf
Royal CC. The openers started cautiously but kept the scoreboard ticking at well over 6 runs an over.
Sricharan Lochan scored 37 with the help of 5 fours and a six. Arjun Reddy played an unbelievable
knock scoring 81 with the help of 6 fours and 6 sixes. His last 30 runs came from just 6 deliveries. None
of the bowlers could truly trouble either of the batsmen as Canary Wharf Royal CC cruised to victory in
14 overs without the loss of any wicket.