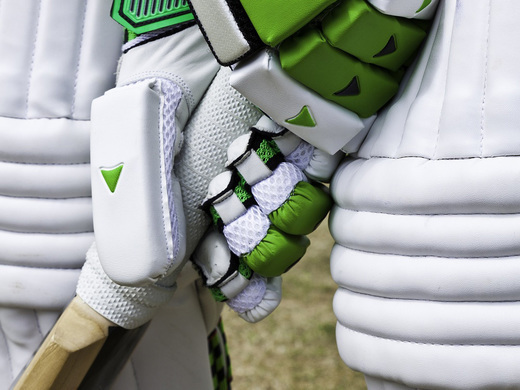 NELCL Week 14: Wins for Tower Hamlets & I Don't Like Cricket

NELCL Week 14: Wins for Tower Hamlets & I Don't Like Cricket

Ruhin Miah83 not out and 4 wickets (Tower Hamlet)

After overnight rain, doubts were if the game could go ahead. The pitch on arrival looked playable for a timely start. Royal Sovereign CC won the toss and elected to bat.

Tower Hamlets CC opened the bowling with 13 year old fast bowler Umar Shafi on one end and experienced Narinder Singh from the other. In quick succession Royal Sovereign CC lost 3 wickets within 6 overs. Some really tight and disciplined bowling was at play. An excellent partnership from there on and selective big hitting came from Royal Soverign and continued momentum at one point felt Royal Sovereign CC could set a score of over 250! Haleem being their best batter scored 70+ and looked the most comfortable batsman. A breakthrough just before drinks on Jordan’s bowling and disciplined bowling performance by Mayank Baluja and Ruhin Miah  taking 4 wickets restricted Royal Sovereign CC to a competitive score of 191.

Tower Hamlets CC opened the batting with Left and Right combination with Mayank Baluja and young Umar Shafi. Mayank lacked patience and got out cheaply on 3. Umar played sensibly and scored 33. The middle order fumbled and quick wickets put Tower Hamlets CC on back foot however kept the run rate on. What then came is an exceptional innings by Ruhin Miah who scored 83* with excellent support  by Jordan to take Tower Hamlets CC home with 2 batsmen still waiting to come in. It was an excellent display of skills and passion on both sides. Hands were shook by both teams with a laugh at the end of the game. Tower Hamlets CC post winning their 2nd game in a row are feeling on high spirits and looking forward to their next game on 28th August

On a sticky afternoon at Springfield Park, I Don’t Like Cricket Club took on Camel Cricket Club in a NELCL thriller. Camel, after being asked to bat first on a lively wicket, came out firing, as they punished some short pitched IDLCC bowling. Rana (47) was particularly impressive as he unfurled an array of aerial shots, to frustrate the IDLCC bowlers and power Camel to a score in excess of 100 after just 15 overs the first innings.

From that point, however, the momentum began to swing. IDLCC’s slow bowlers, led by James Burland (2-23) tightened the screw and started to squeeze the life out of the Camel innings. Some unusually competent fielding, and an excellent second spell from Fin Baker-Howard (2-32) kept the pressure on, as Camel were eventually bowled out for a competitive first innings score of 195.

In response IDLCC began terribly, losing their first two wickets for 6 runs, as Kit Caless (1-40) and Sam Berkless (4-38) combined to produce a terrific spell of opening bowling. Feeling the pressure to increase the scoring rate the IDLCC middle order faltered and 15 overs into the response Camel had reduced them to 59-6.

At this point IDLCC skipper Jack Hope (58*) and James Burland (35), decided to dig in, initially only aspiring to avoid a humiliating 100 run defeat. However, as the ball softened the pitch became more playable, and the humidity of the day meant the Camel bowling attack started to tire. Some hard running between the IDLCC batters soon pushed the score past 100, and their partnership reached 90 before Burland finally fell, caught behind, as Berkless returned to the attack to force the breakthrough.

This wicket meant that IDLCC required 47 to win, with three wickets in hand, and 10 overs to make the runs. Another wicket fell shortly after, with IDLCC still 28 short of the win. At this point Hope decided to hit the accelerator, taking 18 off Berkless’ final over, including one huge 6 over long on. With the pressure starting to ease he followed that up by scoring 9 off the 35th over, levelling the scores, before a quick took IDLCC to an improbable win.