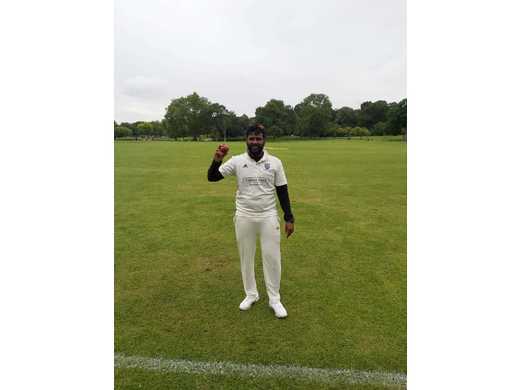 Hackney CC faced Tower Hamlets CC on Saturday July 10th at Springfields. Tower Hamlets chose to bat first under cloudy skies and started steadily with Mayank, Aayush, and Pakku scoring 20, 14 and 32. The breakthroughs came for Hackney from the 25th over with a brilliant spell from Charan Noothula who took 5-14 from six and a half overs, with three clean bowleds. A tight spell from Rakesh Reddy earned a stumping thanks to some quick work from keeper Sam Wrighton, as well as putting on the pressure to lead to a run out. Edgar Maddicott, Kartik Joshi and Ameya Tripathi took one wicket each. Tower Hamlets finished with 118 all out in 37.2 overs.

Tower Hamlets started well as Simar took the wicket of Sam Wrighton in the second over, but after that Ollie Wrighton posted 70*, including 11 boundaries, with Ross Collington running some very aggressive singles to 26*. Hackney got to 119 in the 16th over to complete a strong win after what had been a good start by Tower Hamlets in their batting.

A classic thriller in which LFCC triumphed by 2 runs

LFCC won the toss and elected to bat on a green but relatively hard wicket. LFCC lost Rice in the first over, but Alec and Ruby countered a brilliant opening spell by Adnan (8-0-30-1) and Sikandar (6-1-20-0) defending the good balls but dispatching the bad ones. Ruby made an attacking 39 before being adjudged LBW with the score on 84 for 2 in 17 overs. Alec started opening-up and was well supported by Sam who quickly got into his groove. They put on 48 runs in the next 8 overs. Alec missed a straight one from Nadeem and was LBW for a well-made 41 (LFCC – 132 for 3 after 25 overs). Vijay joined Sam in the middle. The pair showed intent and kept rotating the strike with occasional boundaries to further add 51 runs in 8 overs. Sam was caught at long-on for 36 off Nadeem (8-0-53-3). St Clements bowlers kept a tight line in the death overs and didn’t let LFCC finish with a big flourish, but they still managed to get 50 in the final 7 overs with Vijay finishing at 59* and small cameos from Dave (9) and Troy (11) allowed LFCC to post a par score of 233 for 5.

St Clements got off to a steady start surviving some magical seam bowling by Phil who was unlucky not to pick wickets in his first spell (8-1-24-0). Vijay also bowled a steady spell (8-0-29-2) from the other end and picked 2 wickets, restricting ST Clements to 2 for 72 after 20 overs. With wickets in hands, the match was well in balance. T20 mode was on - 162 to get off the final 20 overs. St Clements started attacking but were soon pegged back as they lost Arslan for 40, LBW to a well disguised slower ball by Muffi. Nadeem (41) and Afghan (51) hit some lusty blows before Troy (6-045-2) bowled a brilliant 32nd over giving 2 runs and picking a crucial wicket of Afghan. A fantastic high catch was also taken by Dave at long-on off the bowling of Troy. 59 were needed in the last 5 overs with 6 wickets in hand - still anybody’s game. ST Clements got 17 in the 36th over (some tough chances were dropped on the boundary which went for 6s) revising the equation to 42 of 4 overs. Chris Murphy and Muffi were given the challenging task to bowl in the death. The next 2 overs went for just 16 runs in which Nadeem got out to a superbly judged catch by Ruby at deep midwicket. The penultimate over from Muffi (7-0-43-2) went for 13, leaving another 13 to get off the final over. Chris Murphy’s figures (7-0-41-0) perhaps doesn’t do justice to how well he bowled at the death. He varied his length along with some slower balls in the last over. 8 were needed off the last 2 balls. Adnan was slogging everything on the leg-side so Vijay (against the advice of WK Alec) decided to bring the 3rd man up and put an extra man on the fence at square leg. As it turned out, Chris bowled a bouncer which was top edged for 4 over short 3rd man. 4 needed of 1. Chris bowled a similar ball which was missed by Adnan and keeper Alec, but it only gently rolled to fine leg for a single. LFCC won by the 2 runs. Phew…an epic game which was played in the right spirit by both the teams.

I Don’t Like Cricket Club overcame Pacific CC on an overcast day at Hackney Marshes. After being put into bat Pacific initially found it hard to score, as they battled hard against the conditions, reaching only 34-2 after the first ten overs of the match. However, as the ball softened, and the bowling became more experimental, they began to build momentum, with Toby Chasseaud (83) and Rizwan (41), plundering boundaries through the middle overs of the game. With a score in excess of 250 a real possibility, IDLCC turned to debutant Giles Tupper, who bowled a terrific second spell, dismissing both set batters and ending with figures of 4 for 34. With the danger men gone Pacific’s run-rate slowed, finally reaching a total of 232.

IDLCC, playing for the first time since they spectacularly collapsed to 78 all out versus London Fields, started nervously. Tight bowling from Rizwan (3-29) and questionable defensive technique left IDLCC on 11-3 after the first 6 overs of their response. This, though, meant that IDLCC’s two best batters were at the crease together, and over the next 15 overs they demonstrated their ability as they added 110 for the fourth wicket, when Legg was bowled after battering an explosive 62.

Another mini-collapse ensued, before IDLCC skipper, Jack Hope, came to the crease at number 8, with IDLCC needing 93 to win from the final 14 overs of the match. Over the next 10 overs some big hitting quickly reduced the target, before Ridley was dismissed LBW for 90 with his team on the precipice of victory. Despite a few nervous moments, and a comedy run out for the 8th wicket, Hope (39*) was able to guide IDLCC to the target, as they won with two overs to spare.