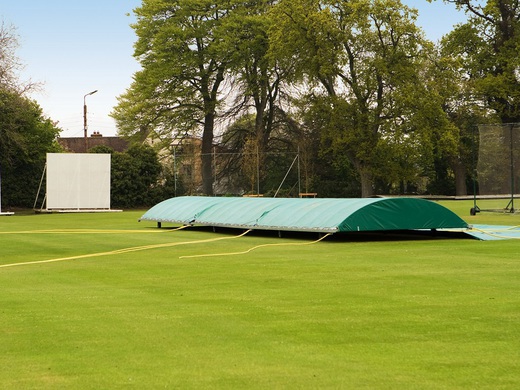 The Passage took on London Fields in Week 13.

The Passage vs London Fields (Springfield Park). The Passage won by 3 wickets.

On the warmest of warm days in East London, table topping London Fields went up against The Passage (formerly the Bloody Lads), at a sweltering Springfield Park. In their recent matchups The Passage has tended to have the rub of the green over Fields, and they were keen to keep momentum rolling after their first league win of the season against Canary Wharf the previous week.

Passage won the toss and put Fields in, with skipper James McAndrew having to take the gloves owing to all three regular club keepers being variously indisposed. With a bowling heavy side (including 5 debutants), they were able to keep the spells short and sharp. Alli (0-16) and Kunle (1-19) bowled peach after peach with the new ball, but Fields’ openers Alec (5) and Ed (18) played sensibly and doggedly, before Kunle eventually bowled Alec for the breakthrough. The top order fought hard in the unforgiving heat, but the runs began to dry up, thanks in large part to some highly committed fielding, particularly from debutant Kumar. The pressure built and built until, eventually, the wickets began to tumble.

Despite great spells from the Passage’s battery of seamers – the standout performer being the evergreen Solomon with 3-12 in 8 overs – it was the introduction of Muhammad Bryce (5-21) that made all the difference. A mixture of flighted wrist spin and deadly quicker balls ran through Fields’ middle order. Troy (22) and Hugh (3) added 34 for the last wicket to take Field’s total up to an eminently defendable 107 all out from 26 overs.

The Passage’s chase got off to the worse possible start, with debutant Joe Kamstra (1) losing his off stump in just the third over to opening bowler, Phil (1-23) – with a McGrath-esque delivery that would’ve troubled most openers. Kunle, fresh off his match-winning 142* the previous week, came in at three but was quickly dismissed, for just 2 runs, by Troy (3-43). With Fields on top and The Passage feeling the heat, Mo Bryce (39 not out) and Leo Fawkes (21) dug in and began steadily accumulating. Leo clipped several beautiful shots off his pads, whilst Mo, after a watchful start, struck several wristy blows back over the bowlers’ heads.

Despite being 3 wickets down (and with only 10 players in the side), Mo and Nass seized back the initiative with some aggressive hitting and quick running. But after Nass was bowled for 21 by Troy, Fields climbed straight back into the game with two wickets in an over from Muffi (3-26), dismissing Alli for 1 and McAndrew for a duck. Muffi then cleaned up Solomon for 7, leaving The Passage with nine to win but only two wickets in hand.

With both sides tasting victory, and all eleven Fields’ players in the ring, the game entered a nerve-shredding final act. After a couple of scampered singles, the returning Phil uncharacteristically slid one down the leg side, evading the keeper for five wides. Debutant Sam then played a soft handed edge through gully for four to take the win for The Passage. Mo Bryce carrying his bat for 39 not out, after taking a five-fer earlier in the day, to round out a truly outstanding individual performance. And despite some choice words being dished out during what was, in every sense of the word, a highly heated chase, it was good vibes all round in the post-match, Saturday shade.

On a sunny day tower Hamlet captain won the toss against canary wharf royals and elected to bat first and lost 2 quick wicket for 13 runs. From there Tower Hamlet's youngest batsman Aayush Baluja and senior campaigner Tanveer Shafi got a steady start and scored a partnership of 73 runs where Tanveer scored 39 before giving his wicket away. Although Tower Hamlet's were losing wickets on regular interval, Rumon  was scoring runs with ease. Rumon scored his personal highest score of 48 not out before he and others around him took the total score of 196 for 9 wickets. Vinit was exceptional with the ball taking 4 wickets and gave canary wharf royals the early breakthrough. When canary wharf royals went to bat Umar Shafi got the first break through in his first over. Aayush got his first on 2nd over of the inings. Every change of spell was working for Tower Hamlet's caption Mitun. Tower Hamlet got the match under control and won it by 48 runs, bowling them all out on 148. Umar , Ashish, Aayush, Tanveer and Mitun all got 2 wickets each.