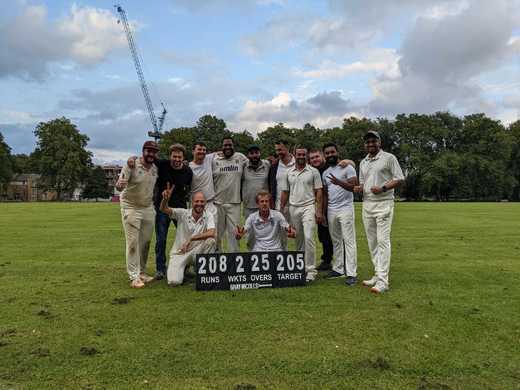 Week 18 in NELCL: Wins for The Camel & London Fields.

Week 18 in NELCL: Wins for The Camel & London Fields. St. Clements vs Hackney CC abandoned due to rain.

The Royal Sovereign hosted The Camel at Millfields Park on Saturday in the annual Pub Cup fixture of the North East London Cricket League.

With rain at the start and the threat of more to come, captains Kit Caless and Ray Demare and umpire Arshad Mughal agreed to shorten the usual 40 overs to 30, which produced a spicy and brilliant game of cricket.

Caless won the toss and put the Sovereign into bat on a damp pitch, hoping for early wickets with low bounce. However, Sovereign got off to a flyer with Luke Browne and Warren putting on 47 with ease before a bullet throw from Rana Ghosh aiming at one stump ran out Warren with a direct hit. Browne continued superbly with some big hitting, assisted by several dropped catches in the field from the Camel, with Lucius Fulgence supporting in a 91 run partnership before Fulgence was stumped by the garrulous Camel keeper Rich Hagan off the flighty off spin of Nabil Umrani. Browne then freed his arms for a boundary bash until he was caught by Caless with a sliding catch in the deep off a David Babbs inswinger for an impressive 77. Demare closed out the 30 overs with a measured 32 not out, whilst Babbs took two more quick wickets (ending with figures of 3 for 39). The Sovereign totalled with 204 for 5.

The Camel openers took to the field knowing they needed a fierce start to keep up with Sovereign’s run rate. Firoz Purappattil took the proverbial bull by the horns, smashing 34 off 20 balls, including two huge 6s.  Hugo Borren, with two centuries under his belt this season already couldn’t quite get out of the gates and fell for 16 clean bowled by a peach from Mikey Gordon. Firoz followed soon after with a top edge hoik landing in the safe hands of Demare. A wobble? The Camels were worried. But it turned out they needn’t be as number three Rana Ghosh batted with barely a single mistake all innings, bludgeoning 90 not out including four sixes and ten fours with consummate ease. Matt Hoslin, usually the attacking number four for Camels, supported Ghosh by rotating the strike and producing some spotless drives through cover to end 33 not out. Their partnership of 142 sealed the game with Ghosh appropriately hit the winning runs with a four, helping the Camels to win with five overs to spare.

The game between the two remaining pub-based teams in the League was played with great spirit and competitiveness, earning both teams well-earned pints on Saturday evening.

On a famous day for English cricket with the inaugural Hundred final taking place at Lords, top-of-the-table London Fields Cricket Club (LFCC) took on Clapton & Oval (C&O) in an equally significant league/franchise clash at Springfield park in Hackney. C&O batted first in a reduced 25 over match due to the enduring August rain, but were restricted to 116-6 following tight bowling from the LFCC attack. Ankit played the anchor to the innings with a resilient and top scoring 26, accompanied by cameos from Taha and Mitun. The LFCC openers evidently had dinner plans, and came out with real intent targeting the short boundary, bringing the 100 up in just 10 overs. After one strike too many Ed Knight was bowled out for 62 with 20 runs still needed to win, only for Tom Hughes to come in and hit a six fourth ball to maintain the momentum. Sam Elgar hit a six to win the match, and the sun even came out to shine as the teams shook hands.